I have lived the past twenty four years of my life as a federal prisoner with the Bureau of Prisons number 35316-136 appended to my name. For those of you who have never been inside a maximum security penitentiary, it might be difficult, if not impossible, to imagine it as a place where the plaintive sounds of shakuhachi can be heard. Ah! But it is true. 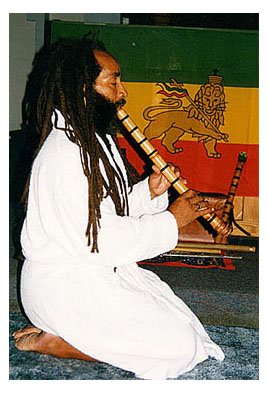 I am honored and happy to be able to share with you a story about a young man (whom doctors had told would never walk again) and a piece of bamboo. This is a story of the human spirit and will at their finest, and a story of the healing power that is within shakuhachi. In 1987, this young man (let's call him Punchy) was shot in the back in Detroit, Michigan. The shot and subsequent operation left him completely paralyzed from the waist down. Call it coincidence, fate or simply the way things happen, but in that very same year I was introduced to shakuhachi by a man named Monty H. Levenson, shakuhachi maker and now dear friend.

Three years later, on the recreation yard of Terre Haute Federal Penitentiary in Indiana, I first saw Punchy -- he, being pushed in his wheelchair around the quarter-mile track; me, sitting under the shade of a lone tree blowing my shakuhachi. I closed my eyes and continued to blow. The song in my heart reflected what I had just seen and my shakuhachi began to cry.

After about two weeks of watching Punchy go for his daily ride, I made arrangements through one of his drivers to meet him. I explained to Punchy that I practiced an ancient art called Hands on Healing. I explained about Touch for Health, Acupressure, Tsubo Therapy, Shiastsu Therapy, Jin Shin Do, Massage Therapy and Meditation Healing using sounds and colors. We talked about Chi and the circulation of energy, chakras, stretching as well as other kinds of physical therapy and exercise. I looked into his eyes and told him I'd like to try to help him. Although he had never heard of such things and was unable to hide his skepticism, he agreed.

Where? How to begin? That was the burning question in my mind as we made arrangements to meet the following afternoon. I knew that I would have to examine his entire body from head to toes and would have to work with him daily for quite a long time. We would both have to be committed to each other and to ourselves. This would involve much work, way beyond physical therapy.

As agreed, we began the following day. After a solid month (6 days a week, 2 1/2 hours a day) of breathing exercises, acupressure treatments, stretching, etc., we were basically where we were when we started. Punchy was locked up inside of himself where I could not touch. I knew that unless he would allow me to come in, unless he could open up and share with me his deepest pain, no amount of massage and manipulation of muscles, no amount of stimulation of nerves, no amount of stretching, no amount of anything would result in an improvement of his condition. 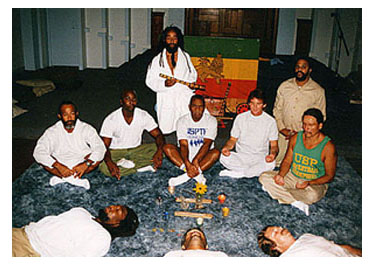 Were the doctors with their professional diagnosis correct in their approach? Or was Punchy -- a young man, who had so much energy inside himself being sentenced to a wheel chair for the rest of his life? Is it true that the solution (if there is a solution) to any problem lies within the problem itself? A breakthrough was needed.

I had recently started conducting meditation sessions with members of our Rastafarian Community in the chapel during which I blow shakuhachi. I asked Punchy to attend. For this special session I gathered together seven men, all physically strong and emotionally and spiritually well-balanced. The seven men would represent the Sun, the Moon, Mother Earth and the Four Directions (North, East, South and West). I explained to them Punchy's condition and what was needed of each man as well as all of them as a collective body. The following is part of a Self-Monitoring Cross-Consciousness account of our first meditation healing session written immediately following the session by Darrell, one of the participants. "A wounded Brother was placed on his back in the center of the room. We were instructed to form a circle around him, lying on our backs with our heads nearest to him and focus upon channeling positive energy so that he might be healed. 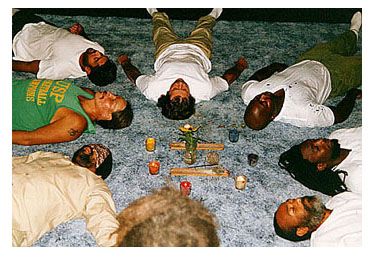 "There was a light. I used it to focus on as I attempted to channel my energy towards the Wounded One. I concentrated on the lower half of his body, for he was unable to walk. The light was drawing near and growing dim, the musical sounds freeing me from anxiety. The light now, ever so near and dimmer still, as the sounds of winds from the flute hovered over my body. I am conscious as my body releases the tension from the controlled breathing and begins to act upon its own to recover its natural pace.The hollow sounds of beauty making me ever so comfortable as the dimness of the light slowly turn to a red. 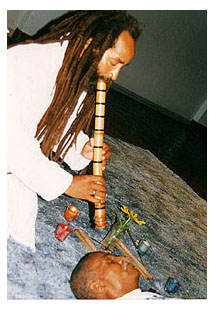 "The flute player is standing over me. I am aware of his presence, but why am I moaning? Why can I not respond to acknowledge him? Where am I? Can I help my wounded Brother, and who and where are the drummers? My body won't respond, but I am conscious. I can hear everything and the breaths of everyone; we are all breathing out of time. Everyone has lost the rhythm except the flutist. He has acted as a tour guide down the pathway of total redness., almost leading me towards serenity, if it weren't for the pain. What pain? Whose pain? So much pain, but why am I still moaning? Where am I?

"It appears that I have allowed the flutist, the tour guide, to take me beyond the realms of my control. I can sense serenity, but the pain . Oh! The pain! And why do I feel as if I'm not alone? The corridor, or pathway, which has turned blue some time ago is now glowing and has a strange aura. The silence broke. 'Rub your hands together.' It was the familiar voice of the tour guide, and I made motions with my hands, which was all I could do to make him aware that the command had been heard. I didn't quite know how to function, for I was distant, incoherent and a slight bit delirious; but I could sense that he knew, for I was still trapped in space. 'Rub your hands together so that they generate energy, and then rub the warmth over your face. Wash your face with energy.' I was able to comprehend the fact that this was, no doubt, a command, and I found myself obedient, my body began to respond, my eyes opened .It was over."

After the session had ended and everyone else had returned to this plane, Punchy was still out. When he finally awoke, he blurted out, "What happened? Where I been?" Everyone laughed.

I was terribly excited and anxious to talk with the Brother who had been moaning and groaning and rolling his head back and forth. I needed to know what he had seen, what he had experienced. He and I got together immediately after everyone had left the chapel. As I blew shakuhachi at the top of the stairwell, he recorded what you have just read. 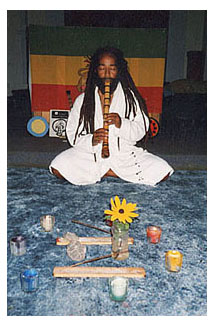 Ah! The breakthrough! On so many levels. A small piece of bamboo, 1.8 feet long had opened doorways which had previously been welded shut. Shakuhachi had done in 1 1/2 hours what no human being had done in three years. Shakuhachi had made it possible, via Darrell's psychic bonding with Punchy, to connect with and to deeply understand Punch's psychological and spiritual pain. During our next working session, Punchy and I discussed all that we had both learned, and for the first time he opened up completely.

From then on, we began each working session with shakuhachi. A healthy diet with vitamins; a combination of disciplines mentioned earlier; meditation and circulation of Chi; weight lifting for upper body strength; stretching, stretching and more stretching for leg strength (The strength of the Tiger lies in his flexibility); and a determined will, all combined so that by the end of the summer (10 months after our first meditation healing session -- December 10, 1990), Punchy could do 100 full squats non-stop, walk five steps on his own, walk behind his wheelchair with me sitting in it and push me one full lap around the quarter-mile track on the yard.

I wish I had more space to share with you the details of this inspiring struggle of a young man determined to walk again and the never ending mystery that is shakuhachi. I am deeply thankful to my dear friend Monty for introducing me to shakuhachi, and I am eternally grateful to shakuhachi for so graciously accepting my breath and for allowing me to be an extension through which healing can pass.

In addition to studying and practicing meditation and the ancient healing arts of China and Japan, Veronza Bowers, Jr. is an accomplished musician and composer of original pieces for the shakuhachi.
Anyone wishing to contact Veronza can reach him at the following address:
Veronza can be reached at the following address:
Veronza Bowers, Jr.
#35316-136
FCI-2, PO Box 1500
Butner, NC 27509 Reprinted from Kyoto Journal No. 32 - Summer, 1996
The KYOTO JOURNAL is a quarterly magazine of Japanese and international culture.
For subscription information contact
John Einarsen, Kyoto Journal, 35, Minami Goshomachi Okazaki, Sakyo-ku Kyoto Japan 606, Tel.: 01181-075-771-6111,
[email protected],or.jp
http://www.kampo.or.jp/kyoto-journal Go To
Shakuhachi: Orthodoxy & Heresy
by Monty H. Levenson
An article which appeared in the Kyoto Journal introducing Veronza's work with shakuhachi.